From the moment I could walk, I was dancing. Movement and dance were activities that I was innately drawn to, and my parents highly praised my siblings and I for taking part in physical activities. I was always enrolled in some form of lesson such as dance, skating or soccer and I was thrilled to have these opportunities. Upon beginning my post-secondary education, my constant physical engagement, which had been such an important part of my life, quickly declined. Although there have been points over the past few years where I had become more active again, these instances have not remained consistent. Since moving to Ottawa last September, my sedentary behaviour has become much more prevalent. I have made it a priority to create a regular routine that will motivate me to become physically active, even with the stresses and demands that come with being a student at the graduate level.

Upon beginning my graduate program, I have also noticed a decline in my ability to both fall asleep at night, as well as to remain asleep for an adequate amount of time (six to eight hours). This is due to the increase in work load, which has directly resulted in an increase in stress and anxiety, making it difficult to achieve a desired sleep routine. Because of this, finding a solution to ensure a regular and full sleep has now become a priority in my life. This research assignment provides me with the opportunity to critically examine my physical activity routines and determine what forms of physical activity motivate my continued success and how this change in lifestyle can alter my sleep cycles and overall well-being as a graduate student.

No Motivation, No Sleep

Kickboxing was an amazing activity! I had a positive attitude going into the class, as it was set in an engaging and social atmosphere. Being physically active in a setting with others encouraged me to do my best! (Erin’s Journal, 2014).

Upon exercising almost five days a week for four consecutive weeks, (Figure 1) represents the numeric values given to each form of exercise performed over the duration of the research period. 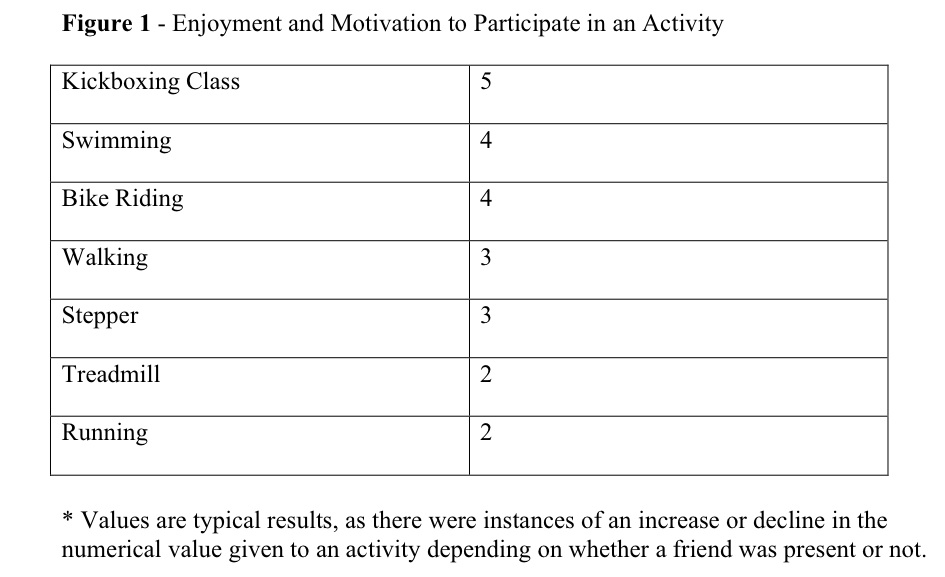 There is very strong evidence that the exercises I was most motivated to engage in were activities that were less structured, as well as activities I participated in with a friend. Activities such as swimming, biking and kick boxing classes that had an element of variation every time I participated in them scored higher than activities such as walking on the treadmill or running the same route with little variation. The numeric value of an activity also increased or declined based on whether the activity had been performed with a friend on that particular day or not.

Although it was not instantaneous, there was a very clear change in my sleep patterns upon beginning my exercise routine. The number of nights I would have little, if any, difficulty falling asleep became less frequent. The number of nights I would wake up during the middle of the night once I had fallen asleep became less frequent as well. During the week that my exercise was less consistent, my sleeping patterns, according to my journal entries, were disrupted. A table of significant journal entries excerpts can be found in (Figure 2). 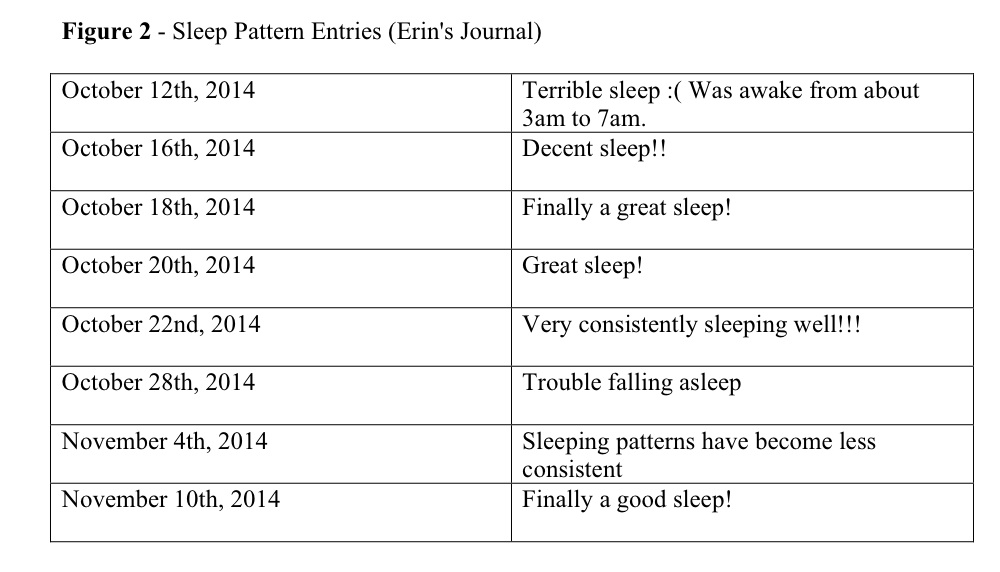 Research has proven that consistent physical activity improves sleep patterns (Bushman, 2013). Factors such as stress and anxiety that disrupt sleep are often alleviated when aerobic physical exertion is placed into daily routine (Driver, et al., 2013). The findings from my journal entries are highly synonymous with this research. I would often find after exercising that I was calmer and any thoughts or worries I had prior to my workout were often less predominant in my mind. This directly affected my anxiety and stress level when trying to fall asleep at night as well. During the week that my exercise routine fell below the five day a week goal, my anxiety was significantly higher according to journal entries, which negatively affected my sleeping throughout that week. Placing consistent physical activity into my weekly routine (in any form) aided in my ability to fall asleep in a timely manner and remain asleep for the duration of the night. I also made a point of ensuring my physical activity was conducted prior to 2:00 p.m. to ensure the high intensity activities I participated in did not disrupt my sleeping.

Graduate students have deemed physical activity to be a rather low priority with relation to other aspects of their lives (Longfield, et al., 2006). Due to the fact that here is such limited research on the physical activity behaviours of these students, there is not much information promoting the benefits of a fitness routine for this group (Keating, et al., 2005). While analyzing my journal it became apparent that the forms of physical activity I was most motivated to take part in were activities with a good deal of variation. Graduate students are constantly bombarded with deadlines and assignments and some of these students are working full-time as well. In order to successfully complete all of requirements for a graduate program, a great amount of discipline and structure is required. Taking all of these factors into consideration, it is understandable why young adults are a group that has shown a noticeable decline in physical activity (Roberts, 1999). However, when I engaged in physical activity that promoted less structure and encouraged variation, this created an opportunity for me, as a graduate student, to remove myself from the rigidity of my daily routines. I was able to participate in something that not only promotes a healthy lifestyle, but also integrates a much needed element of fun into my routine.

Another element which highly impacted my motivation to continue being physically active was having a friend participate in activities with me. Although I had not originally intended on recording the impact a friend would have on my motivation, the scores I would allot to an activity were often higher when I engaged in the activity with a friend. As children, there are many opportunities to participate in activities with peers, whether it is during physical education class or during recreational activities. As we age into our late teens and early 20s, our levels of consistent physical activity decrease significantly (Driskell, et al., 2005) and this may be due to the shift in physical activity expectations. The older we get, the more it is expected that we will participate in physical activity on our own time to as a way of working with our busy schedules. By being physically active with a friend, you are placing responsibility on yourself, as well as your friend, to follow through with these routines. Having this support greatly helps with motivation.

Entering a graduate studies program requires discipline and self-motivation in both academics and personal health routines. The results of this study will contribute to the limited research surrounding the physical activity behaviours of graduate students. Through my identification of specific activities and routines that have proven to motivate me to maintain a physically active lifestyle, graduate students will now have research to refer to when creating their own personal healthy lifestyle goals. The evidence of the positive impacts physical activity has had on my sleep patterns may also serve as motivation for graduate students to chose physical activity as a means of stress relief. This study focuses on my experience exclusively, creating the opportunity for further comparative research to be conducted in this field with higher numbers of participants.

With a more robust understanding of which fitness activities motivate me to maintain a healthy lifestyle, I now feel that I am prepared to continue with this routine to achieve a prolonged physically active life. Although there may be points in my graduate journey where I will fall short of my 5 day-a-week goal, by having a friend committed to the same routine, there will be a sense of responsibility and encouragement to continue with my progress. This research assignment has provided me with a greater appreciation for the benefits that an active lifestyle can have on many aspects of my life, equipping me with the motivation to continue with these new healthy lifestyle choices.